Adidas has revealed a new in-shoe, workout tracker that’ll capture a host of vital statistics for use with all forms of exercise. The Adidas Speed Cell (or SPEED_CELL as the sportswear giant wants us to write it), works in the same way as a Nike+ chip, but captures information from motion in every direction and measures key performance metrics including speed, distance and time during practice and competition for use with sports like football, tennis, basketball and more.

The miCoach SPEED CELL is designed to monitor, evaluate and increase performance of athletes of every level will be able to track their unique stats including average speed, maximum speed, number of sprints, distance at high intensity levels, steps and stride during play across multiple sports including soccer, football, basketball, tennis and running. 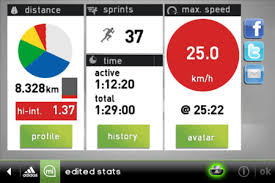 “The on-board memory then stores seven hours of an athlete’s metrics and wirelessly transmits the on-field performance data to their smartphone, tablet, PC or Mac.”

The miCoach SPEED_CELL sits inside a specially designed cavity in the outsole of adidas footwear to work seamlessly with the athlete’s equipment.

The adidas adiZero F50 cleat is one of the first products that have a built in cavity for the MiCoach Speed Cell.  This extremely light weight boot that will help launch the new MiCoach technology for the adidas brand. The new Adidas f50 football boot, worn by Barcelona’s Lionel Messi also features a special slot to place the chip and future Adidas footwear will also be compatible. 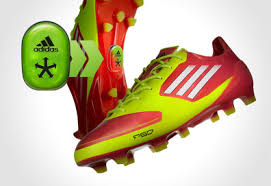