The sky that was overcast and the unfamiliar terrain did nothing to faze Kim Hye Gyong as the 20-year old was the first at the finish line of this year’s Great Eastern Women’s Run, clocking in 1:15:59.

Her older twin sister, Kim Hye Song, was not too far behind at 1:17:52 and nabbing second place as both sisters were touted to be the hot favourites at today’s Run.
“I was not affected by the rain but the route was a bit challenging for me. However, I am very happy that I won but at the same time, I feel it’s bittersweet that my sister came in second as we were hoping that both of us could get first place on the podium,” shared Hye Gyong, while her older sister nodded in agreement, adding that she’s “very happy my sister came in first.”

Not far behind the pair is Japan’s Yuko Watanabe come in third at 1:18:29.

“I enjoyed the race very much and I am very happy with my timing. It has been a great experience for me, I was at first worried that it might rain, but thankfully everything went smoothly and the race was a success,” shared the 26-year old.

Kim Hye Gyong beat 14 others in the Elite category to win a prize money of USD$8,000, the highest prize money in the region for a half-marathon. The 21.1km route took runners past the Singapore Flyer, Gardens by the Bay, and Merlion Park with the finish at The Float @ Marina Bay. This year’s run saw 15 Elites from eight countries in Asia- India, Japan, Malaysia, North Korea, the Philippines, Singapore, Taiwan and Vietnam, vie for the top prize.

Flying the local flag high was Singapore’s fastest female runner, 32-year old Anne Qihui, who clocked in 1:25: 37. Her compatriots Lim Baoying and Choo Ling Er had timings of 1:36:25 and 1:39:49 respectively.

“It was a good race for me; one of my better ones! I felt so comfortable and paced myself well and I am very happy with my results,” said Qihui. 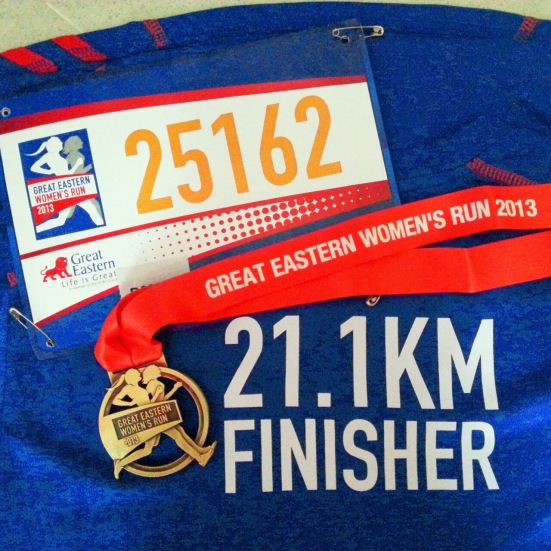 Commented Dr Khoo Kah Siang, CEO (Singapore), Great Eastern Life, “Congratulations to Kim Hye Gyong for running a great race as well as Singapore’s Anne Qihui for doing Singapore proud. We are delighted to see so many women here today taking that first step towards leading a healthier lifestyle. As a LIFE company, Great Eastern wants to empower women live healthier, better and longer. The Great Eastern Women’s Run is a great platform for women from all walks of life and ages to exercise and live great. For women, support from family and friends are important. Which is why this year, we have expanded the fringe activities to also include exciting events for fathers, boyfriends and children. While the Run is for ladies, we want the event to be a family affair.”

Running For A Cause

The Great Eastern Women’s Run was also an opportunity for female runners to raise awareness and funds for health issues closely associated with women. This year, $38, 370 has been raised for the Breast Cancer Foundation, Singapore Heart Foundation, Singapore Cancer Society (Cancer Prevention Fund) and Singapore Council of Women’s Organisations.

“This year’s event was a resounding success following the great impact we made last year and we are confident that we’ve provided a Race experience that is unprecedented and top-notch. Runners have more to look forward to year on year as they embark towards a healthier lifestyle,” said Ben Wee, General Manager of HiVelocity Events Pte Ltd.