Back again by popular demand was the HomeTeamNS REAL Run 2013, a running event like no other organize by HomeTeamNS which promises runner a challenge to run a 10km distances across 4 different terrain – Trail, Road, Sand and Asphalt. It seems like we had only run last years REAL Run 2012 only a few month ago in October at Changi Exhibition Center, but somehow the organizers have decided to bring forward the event to May 25th and at new “Homecoming” venue – Sentosa.

Just a short history lesson, REAL Run was first organize in Sentosa. Back then, it was called Nike REAL Run and it was stapled event for most runners as it’s route impose a challenge to ma ny runners. Few years when by and they move to Changi Exhibition Center where they change it to New Balance REAL Run till 2012 and they are back in Sentosa. Organized by dedicated members of the REAL Club, a sub club of HomeTeamNS for Police & Civil Defence NS Mens and their family, this event had grown over the years and had open the event to the public.

This year, we send our writer, Farhan Rosman to take on the challenge of experiencing the REAL Run signing him up for the 10km category. Read his review below..

What got me signed up for this race is basically the prospect of running in Sentosa. It didn’t disappoint. The run started off at the Sentosa Causeway making it convenient for runners to get to the starting point on time via public transport. Flag off time was delayed by a few minutes. Many runners especially at the middle and back couldn’t hear the announcements made by the emcee.

At ﬂag off time all runners made for a good start, the road was wide and the slopes were gentle. However after the 1K mark the road begins to narrow to a single car lane causing undesirable bottlenecks especially at the water points. Many runners who were trying to build up momentum were left frustrated. Fortunately there were a few downslopes after that and many runners took advantage of this to make up lost times.

The ‘killer’ part of the route happened after the 3K mark as the route took runners into the jungle trail. It was a welcoming challenge to many as they challenge their legs up the slopes. I guess this is what ‘Real’ run was about. 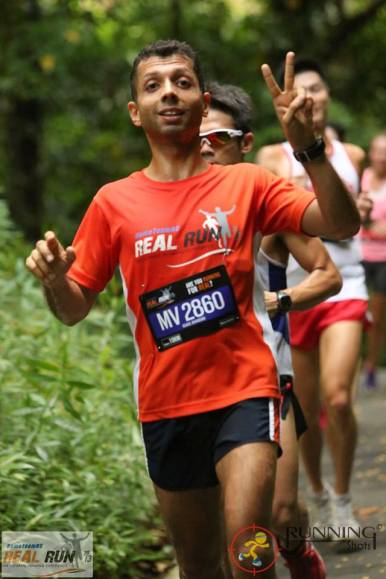 The highlight of the route for me is the beach run. Unlike last year Real Run, the beach was not sloped at an angle making it a much more comfortable run than last year. The sea breeze provided a very pleasant respite for us who are already drenched in sweat. 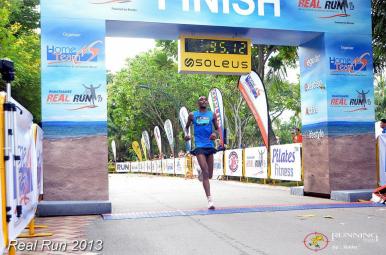 The ﬁnishing point was at Palawan Beach. It was a well-thought of location because it was near the Beach Station. Despite the location, I feel the race village was very cluttered. There weren’t any clear signage for baggage or medal collection. I had to roam about the area to collect my ﬁnisher medal. But that was not the biggest disappointment. The biggest disappointment after a very good route was baggage collection. It was ridiculously chaotic.

It took me an hour before i got my own bag. All in all, Real Run 2013 was vey enjoyable thanks to the amazing route. I personally feel every Real Run should be held at Sentosa. Despite the few shortfalls, many runners will deﬁnitely look forward to the next Real run. 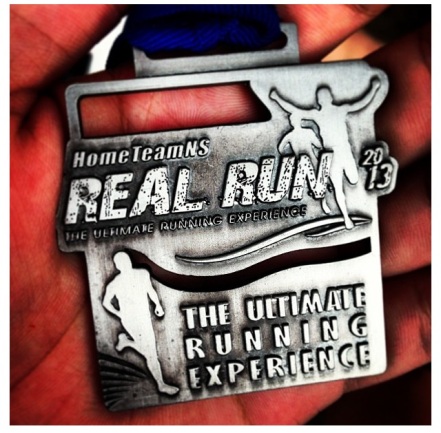 What can be improving?

Do share with us your experience running the REAL Run 2013.. About HomeTeamNS REAL Run

The HomeTeamNS REAL (Regular Exercise, Active Lifestyle) Run set out to promote a healthy and active lifestyle amongst Home Team NSmen. Since its inception in 1996, the run has grown to include running enthusiasts who seek to be challenged. The combination of Road, Trail and Sand, coupled with an undulating course has proven to be just the race to challenge runners of all ages. Cheers! (: