It’s the New Year and everyone would have probably come up with their New Year’s Resolution by now on what they want to achieve in 2013. Some may want to run their first marathon, first Ultra-marathon, first 10km or even run their first cross discipline race which is a race that involve a combination of discipline such as running, swimming, cycling or even stairs climb.

If your goal is to try and complete a Running + Stairs climb event in 2013, then the NTUC URun is the event for you. The URun host several race categories among them are the OMB Challenge, which is short for One Marina Bay Challenge whereby participant will run a distance of 10km followed the stairs climbing up 30 stories to reach the top of the NTUC building.

Since the first time they introduce the category in 2011, the number of participants for such category had increase and to make this year much more challenging, Organizer had extend the running portion of the race to 15km, 5km more than the past 2 years.

Not sure how to train for NTUC URun? Keep Reading…

Part 1 of the event is a 10km or 15km depending on your chosen registered category.

Some find running unappealing as it exhausts your entire body and it get bored since you have to keep doing it for quite some time over the distance. Many people would simply go for long slow distance run (LSD Run) as part of training to build endurance, but that’s not necessary. LSD takes a long time and with our current lifestyle, many of us could not afford to spend an hour a day for long run. Rather than doing LSD, Interval training is an excellent alternative that essentially involves working much harder for a shorter period of time. (Interval Training)

There are several methods of running in intervals, but here’s one example to give you an idea:

Technically you will be running as fast as you can for one minute, Therefore, you would only have to maintain that intensity for a very short period of time. As you will immediately slow down and get a break afterwards.

So instead of enduring 30-60 minutes of sustained running, you only have to endure the run for a short bursts of time.

Each burst can vary in timing as well. For example, some structure their intervals like a pyramid, starting small, peaking in the middle and then slow back down towards the end. One very effective interval training circuit is called Swedish Fartlek (speed play), Farlek provides variation in the types of running performed in a single session.

Interval training may sound a little daunting but if you are someone who never had been able to stick to long distance running, you may find it is much easier to accomplish interval training and best of all the results are quicker.

In the OMB challenge, as soon as you finish the running portion of the race, you will enter the NTUC building through the stair section. From there it’s 30 floors up to the finishing line. The plan here is not to exhaust yourself or to start too fast as pushing yourself hard for the run may inevitably cause you to tired out way before you reach at the start of stair climb. Instead try pacing yourself throughout the run using the talk test. If you are panting for breathe then you should slow down, if you can talk normally as you run than you are at a good pace but if you are singing as you run, then you would probably want to speed up a little.

Stair climbing is a simple exercise you can perform anywhere there is a staircase, whether it’s the HDB stairs where you stay home or in your office. You’ve likely seen films that depict athletes running up the staircases in stadiums before and this is because stair climbing is a great exercise. 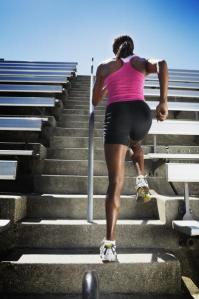 How do you train for Stair Climbing?

Stairs Climbing is good as it can be done regardless of the weather. One way you could improve in stairs climbing is to make it part of your daily routine. When you have the option to take the stairs, take them, and run up them skipping every other step. This is a good way to work in a little exercise to your regular day. 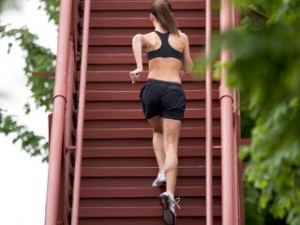 Stair climbing is also great for strengthening the muscles in your legs, so if they are part of your routine you may choose to skip stair steps in the lower body section.

NTUC URun will be back on 24 February 2013 (Sunday) and it will start from the Promontory @ Marina Bay. This year will see the introduction of the new 15KM Competitive Run & 15KM OMB Challenge Run + Climb) categories – bringing the “OMB Challenge” to new heights.

One thought on “How to Train for NTUC URun OMB Challenge”