It’s that time of the year once again to race to the pinnacle of Singapore’s iconic 73-storey tower of hospitality – Swissôtel The Stamford in the annual Swissotel Vertical Marathon 2010. This year, Swissotel the Stamford is celebrating it’s 30th anniversary thus, participating in the event would be a little special. Event was held on the 21st November 2010. Unlike the previous year, this year they introduce a few more categories aside from the Open and age group categories, This year the event introduce the National Fighter categories for serviceman, The Swiss Tribute Challenge which is a category to pays tribute to individuals with Swiss nationality, or individuals in Swiss organisations and the Ultimate Championship challenge category which is an all-star category where thhey welcome all elite runners / past winners of any Vertical Marathons (within the last 5 years to challenge themselves against the best. The event also saw the return of the lovebird challenge.

Race pack collection was held a week before the date and the goody was once again generous like the previous years. Just like last year, Mizuno was the chosen sport apparel for the event.

Climbing up 73 storeys with 1,336 steps within minutes may sound like a daunting task for many but over the years there had been a growing numbers participant this year is not exception a record 2,000 participants competed to complete the challenge this year. This is an increase of 400 participant as compared to last year record.

This year saw some new and also some familiar faces returning once again to compete and challenge the 73 storey Swissotel Vertical Marathon. Some came for the experience while some came to do challenge their previous timing.

The event was flag off separately base on the different categories in batch of 5, this means that at anyone time 5 participant were release from the starting point at an interval of 1 minutes between each batches so as not to cause a congestion as they entered the building. Participant will make their way up the building through a door located next to the Starbuck.

Taking part in event for the 4th time this year had taught me not to start too fast, instead stick to a consistence pace and to constanly breathe (I had seen many participant experience shortage of breathe taking part in this event over the years and partially due to the lack of breathe they took to complete it).

As I climb at a consistence pace to the top, I slowly catch up with a few of the participant from the earlier batches who stop for a breather. Water in form of bottled mineral drink was given out on certain floors for participant, this is good as it prevent spillage on the steps, I participate a vertical marathon event that gave out cups of water which then cause water to be spilled all over the floor, making it extremely dangerous for the other participants who were sprinting up.

At almost every 10th floor there is a motivation quote pasted on the wall to motivate the participant to not give up.

Champions aren’t made in the gyms. Champions are made from something they have deep inside them -a desire, a dream, a vision.’
-Muhammad Ali

At the 50th storey many participant including myself were already feeling the strain of the challenge, moving up the steps to the next floor seems so difficult and there were some who were feeling a little  nausea and clausterphobic from in the confine space.

72 storey, 1 more floor to go. The roar of cheers can be heard from the 70th storey. Volunteers were clapping and cheering on the participants as they emerges out onto the helipad of the Swissotel. It was the most glorious moment for all who had beaten the challenge, Finisher medals were given out to the finishers as they crossed the finishing line. Ice cold mineral water were also distributed. With no pressure I beat my last year record, completing the event in 12:49mins

The view from the top of the Swissotel was epic despite the haze. One could see the whole city scape of the Lion City.  Marina Barrage, Singapore Flyers and even the new Marina Bay sands can be seen from the top, the view was worth the climb up. Finisher took their time to take pictures around the Helipad. Our very own Spiderman runner, today wearing the black spiderman suit made his way up the helipad as well.

Then it’s back down on the escalator to the ground floor. On the way down, I met up with a very special particpant, 25-year-old Dwayne Fernandes a double amputee who travel all the way from Sydney to take part in the event. He is true inspiration for all and he’s not going to let his prosthetic legs stop him from getting to the top of the 226-metre tall hotel.

That was not the only surprising thing I saw that day, A couple of months ago I witness couple ran the gold coast airport marathon in their wedding attire but this time, I saw a couple taking part in the lovebird challenge in their wedding attire. I guess this is the first time someone actually attempted this but it sure is romantic.

Overall it was once again a successful and smooth event, the only thing I don’t like is that they should have provided isotonic or redbull drinks on the roof like the previous years and secondly, most of the return participant feeks that the organizer should change the design of the medal. 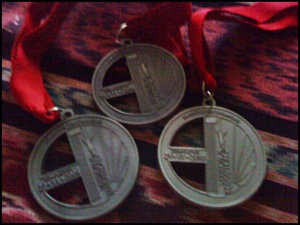 Other than that it was an enjoyable event, 2 of my friends from the Gold Coast Airport Marathon had a fun time participating in the iconic event as well.

Hope to return once again for the fifth time next year.