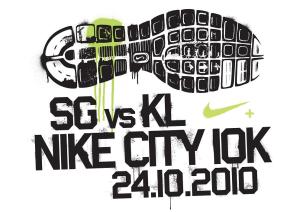 ﻿﻿﻿﻿24.10.10 The morning light up in a sea of luminous green as more than 12,000 people turn up to ran in the Nike City 10K run. Many was relief to be able to participate as the haze level was back to normal thus allowing the run to proceed as plan.

More than 12,000 runners attended the run which took off next to the Marina Bay Floating Platform. This was the run that many had been waiting for since the beginning of the year, the 12,000 registration slots for the event were taken up immediately within 10 days of it’s media press release.
This was the 3rd time Nike organize such event but this year instead of the Human Race where the whole world unite as one to run on the same day, this time around Nike organize a friendly competition between 22 cities around the world.

Singapore was match against Kuala Lumpur and the city which clocks the most kilometres by the end of October receives a US$30,000 cheque from Nike for that city’s charity. Singapore’s donations will go to the Singapore Children’s Society. Kuala Lumpur ran on the 10.10.10 while Singapore will run their Nike City Run on the 24.10.10

Having participate in the past years, one can be sure that this time around will not be the same as the previous as Nike’s believe in doing something new and unique every time. Route was only release to the public a week before the race day so many were still unsure of what to expect. 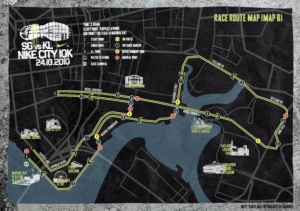 That morning the city area light up as they came to compete in their lime green race tee. Some came to compete while some were there just to enjoy the run with their friends and love ones. There were 2 waves to flag off all the participants, even so some runners begin their race slightly later as there was a congestion in the some of the baggage collection point.

Runners ran from the floating platform towards Suntec city and Nicole Highway, the route was generally flat and with ease we reach the first water point aid station at the 2k marking that serve runners with ice cool 100plus. The runners were treated to some music along four entertainment zones which each featured a genre like rock, hip-hop, pop and dance. The entertainment zones certainly added some uniqueness and vibrancy to the run. I personally like the rock and hip hop zone where the performancer sangs, dance and cheer the runners on.

Runners made their way along Kallang area before heading into Republic Avenue, this was, for some the only toughest part of the route as it was a going uphill. The rest of the route was relatively flat thus, running in my Lunarglide +2 make it easy for me to speed up in flat road condition as it provide sufficient cushioning on the heel area. Runners soon made their way to the F1 pit and towards the iconic Singapore flyers before running to the finishing line located in the Marina Floating Platform.

Instead of the Finisher medal or Bracelet like the previous 2 years, this a year they gave out a unique finisher toy. Each finisher was given 1 of 4 limited addition Nike minis toy that symbolize rock, hip-hop, pop and dance. after collecting the finisher memento, the runners were lead to the race village where several booth among them were the sports massage booth, where runners can get a complementary massage to ease the tension on tired sore muscle. The stage was where everyone directed their attention to as the emcee gave out goodies and announced the top finisher of each categories.

The floating platform was literally swam with runners, It  felt like a reunion run for some as there were so many familiar faces around on that day. No matter if they are a newbie or a seasonal runner everyone gathers at the floating platform as they celebrate their victory in completing the 10k run.

Overall, It was a smooth, clean and well organize event. I personally appreciate the fact that they provide ice cold 100Plus & drinks at every water points. I really love the entertainment zone that was set up.
However, there were some areas that can be improve for the future, some of this changes that could be implemented for the future is:
Early release of Race Route
Some runners feels that it will be good if Nike would release the Race Route earlier so that they could do a walkthrough or a pre run before the actual day.
﻿
Wave Flag off Confusion
On the day of the run, some runners were confuse of the 2 Wave flag off that was indicated on the race guide

Finisher Memento (Nike Minis)
Some runner was disappointed of the finisher momento as they would prefer a medal or a bracelet rather than the minis. Some felt that the minis looks like a Mc Donalds Happy meal toy while Some feel that it would be better if the “finisher” was printed on the minis itself rather than on the package.

To Sum up everything, The SG vs KL Nike City Run was a success, many runners had an awesome time being apart of the event. C’mon Singapore Let’s continue doing our part to clock more mileage for the Singapore before the 31st Oct.

One thing for sure, many have already looking foward for next year Nike Running event and one can be sure that Nike will definitely do something new compare to this year.. Helix Bridge? Let’s just wait and see.
Lastly, Let’s not forget to thank the volunteers and organizer for organizing such a memorable and exiciting event for us all.