10.10.10 is a very auspicious day for some and it occurs once every century, what better way to celebrate it then to run a 10km. It was Mizuno Wave Run 7th year anniversary organizing the event; this time around it is held in Temasek Polytechnic (TP) crossing around the Bedok Reservoir, making a loop back to TP.

Unlike Last year, where the Mizuno wave run was held in Nanyang Polytechnics (NYP) and mileage for the run was 10miles. This time around, due to the special occasion it was held once again in TP and distance was back to the traditional 10km.

This was going to be my 3rd Mizuno Wave Run ever since I started running back in 2007; back when I was a student in TP. Having missed last year event due to a clash in event, I see no excuses not attend this time around. TP was like a home turf for me as I ran there regularly and being my third time taking part in this race, I could only expect the changes implemented over the years to be good and better than the previous years.

More than 4200 participant gather at Temasek Poly that morning at the sports hall in their red Mizuno wave run tee “10.10.10” as they wait for the official to flag them off. Flag off was at 0730hr.

Flag off, participant made their way around the track and out through the gate. Heading towards Bedok Reservoir, it was all flat routes making it easy to pick up speed. 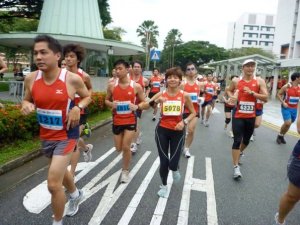 We ran into Bedok Reservoir, where the terrain changes from flat road concrete pavement into sandy trail with sand, rocks and the occasional mud. Water point provided participant with ice cool 100plus and drinks which was so refreshing. 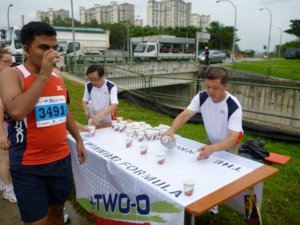 Participant ran the full circumference of the reservoir which covers about 4.8km before heading back on concrete road as they head back to Temasek Polytechnic. As we entered the gate, the finishing line seems so near, we ran on the track and across the finishing line.

A unique finisher medal was distributed to all finisher as they crossed the finishing line. Many including myself rush to the 100plus booth for a much needed refreshment as we cool down. There were several booth set up among them is a booth showcasing the latest Mizuno winter collections which feature the new performance shoe – The Mizuno Precision 11.

Overall, it was an enjoyable morning run and it was such a great way to celebrate the special day 10.10.10. Maybe what they could improve in the future is to provide more toilets and have more water point along the route. The goody bag for this year includes the Mizuno event running top and duffel bag. 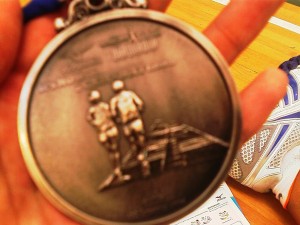 The Mizuno Wave Run made its debut in 2003 with 1,631 participants and has grown over the years into an established feature in the local running calendar. Last year saw the highest the number of sign-ups with 4,968 runners. It has dropped slightly this year to 4,294 which is still a respectable figure considering the other races going on simultaneously around Singapore on the same day