Are you long distant runner? Then you are well familiar with the term chafing or abrasion.

As an avid runner myself I face this problem most of time during my long runs. Chafing is caused by repeated motion, when skin rubbing against loose fabric or other skin. Chafing most often occurs around the bra line (women), nipples (men), inner thighs, and under the arms. Moisture, either from sweat or rain, can worsen chafing.

Normally, before a long run I would apply thin layer of BodyGlide or Vaseline on the vulnerable areas. But awhile I realise that it will wash out as it is not too waterproof as a result I still will face the same problem but minimal. Until, I came across Neat 3B Action cream.

The world’s first Action Cream. Simple, A safe and effective solution to the problem of sweat rash and chafing.

Neat Effect 3B Action Cream incorporates an effective antiperspirant in an emollient, soothing cream base for application to areas where skin surfaces rub together and become inflamed.

The underlying problem in these situations is perspiration and the resultant chafing between skin surfaces: sites at which this occurs are between the buttocks between the legs and beneath the breasts.

Developed by the same doctors who introduced Neat Feat Roll-on, the world’s first roll-on antiperspirant deodorant for feet, Neat Effect 3B Action Cream has quickly been adopted by sports people and by people living in the warm climate areas of Australia and New Zealand.

Neat Effect 3B should be applied to clean, dry skin once or twice daily, depending on individual requirements. The active antiperspirant reduces the amount of sweat produced and the emollient, lubricating cream base prevents friction and chafing. I would normally apply about ½ an hour before the race or run. As it is waterproof and non-greasy it will last up to 6hrs or more.

Drop me an email if you wish to enquire more about the Neat Effect 3B Action Cream. 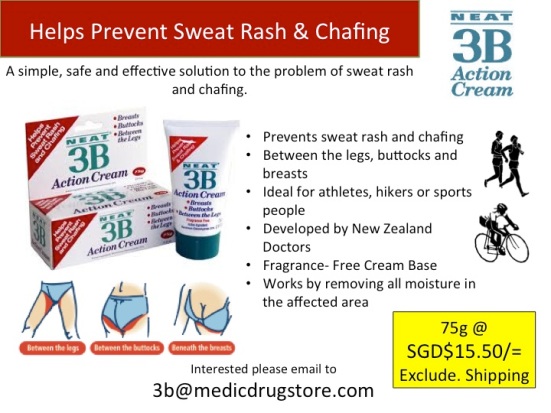 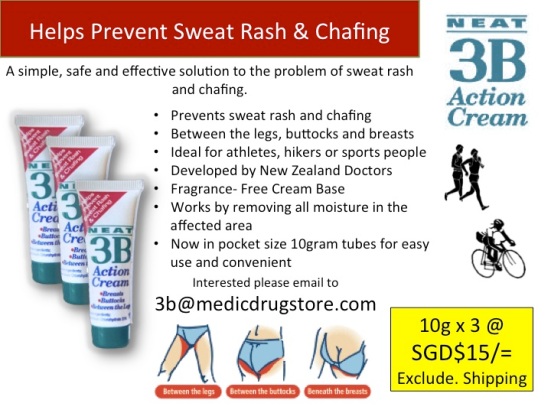